Camping in the Kgalagadi is not for sissies, particularly in mid-winter

Posted on February 7, 2011 by Administrator 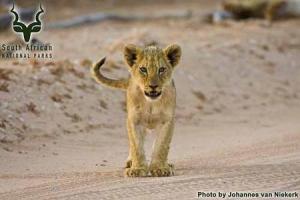 IT is completely plausible that the expression, “chilled to the bone” was coined by a shivering soul in a tent during the early hours of a June morning in Africa’s first-established transfrontier park, the Kgalagadi.

With the temperature at -14°C, I am convinced that I heard the marrow of my bones rattle as – hopefully but ineffectively wearing every pair of socks available, two t-shirts, two jerseys, two pairs of jeans, a full fleece tracksuit, a beanie and fleece-lined gloves – I snuggled closer to my husband in our double-layered sleeping bag, which was covered with an aluminium emergency blanket.

Camping in the icy dustbowl of the Kgalagadi in winter is not for sissies. But, when the sun rises and the red dunes reflect its warmth to above 25°C during the day, you will be pleased with your nightly fortitude.

With its sparse and scrubby vegetation, and gatherings of mammals in the dusty, dry riverbeds of the Nossob and Auob Rivers, the 3,8-million hectare Peace Park (as it is also known) is a first-rate game-viewing holiday. And, once you have warmed up outside your tent – most effectively done by standing tall and still with your face to the sun like one of the many little ground squirrels and meerkats that emerge from the ground each morning for the ritual – the day is best spent at several of the camp’s great vantage points.

While the Kgalagadi is well-known for predator watching – Kalahari lion, cheetah, leopard, spotted and brown hyena, wild dog, aardwolf, caracal, black-backed jackal, honey badger, African wild cat, black-footed cat, striped polecat, genet, and bat-eared and Cape fox – and for the migration of large herbivores such as blue wildebeest, springbok, eland and red hartebeest, many of the less obviously spectacular fauna and flora are as intriguing.

The sociable weaver is synonymous with the region and, before you see them in the Kgalagadi, you cannot fail to notice their massive nests on telephone and electricity poles, and fences – many collapsing under the weight of the thatch-like structures – as you approach the park entrance at Twee Rivieren along the R360.

These communal nests are extremely well insulated to buffer the region’s climatic extremes. (In my case, as I trembled with cold in the tent below, this led to nest-envy.) The dwellings are up to 6 metres long and 2 metres high. They weigh as much as 1 000 kilograms and house as many as 300 birds. It is not uncommon to see a mongoose scurrying about on the ample grassy mounds in search of eggs and chicks.

One of the heaviest (males weigh up to 18 kilograms) flying birds, the threatened Kori Bustard also occurs in the Kgalagadi and, if you are lucky, you will see one striding through the grassland, swinging its neck and head in a strange backward-forward motion.

The gemsbok of course, is iconic of the Kgalagadi. This is not surprising given that a portion of the current park area was, in 1931, proclaimed the Kalahari Gemsbok National Park mainly to protect migrating game, especially this particular species of antelope. Although you will see herd after herd of gemsbok grazing or wandering across the dry country, they remain a lovely sight with their theatrical black-white face marks and long, straight, rapier-like horns.

Industrious weavers, heavy raptors and clown-faced antelope aside, there is no denying the triumph of describing a lion sighting when you gather around a Kgalagadi campfire for the obligatory ‘who-saw-the-most’ après-viewing contest. After all, although it is not registered as a separate species, the Kalahari lion is considered exceptional. It has evolved to survive in its inhospitable environment, and subsists in relatively small groups, roams larger territories, and hunts smaller prey more often than lions of other areas. The Kalahari lion even looks different. It is taller at the shoulder, lighter in weight and many of the males possess black manes.

Camping in the Kgalagadi in winter is a dust-infused and chilly affair. The discomfort however, is quickly forgotten as you look on into infinity and catch sight of some of the magnificent wildlife that lives there. And, if that wildlife is a huge black-maned lion, you are likely to feel a little warmer that night.

2 Responses to Camping in the Kgalagadi is not for sissies, particularly in mid-winter