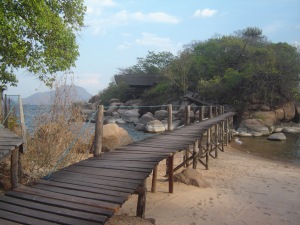 The wooden platform linking the main island to the little peninsula at Mumbo Island. (Photographs by Penny Haw.)

IT was while looking for a new snorkelling spot off Mumbo Island in the calm, clear waters of Lake Malawi that my husband and I spotted splashing about 25 metres ahead of our canoe. Paddling closer, we discovered a juvenile African fish eagle struggling to stay afloat. She had, it appeared, been overly ambitious about her flying and hunting abilities, and had fallen into the lake about 100 metres from her home on the island. Unable to lift her waterlogged wings from the water to fly off and clearly not a swimmer by anyone’s standards, the bird was panicking.

Without hesitating to discuss strategy, my husband stretched out and placed the blade of his paddle beneath the young eagle. As he lifted her out of the water, the bird lurched momentarily before rising to her full height and regaining her balance on the plastic blade beneath her talons.

Rescue Ranger One slowly swung the paddle-cum-eagle-hoist past me towards the stern. The bird hopped off the paddle and positioned herself safely in the centre of the flat area behind me on the canoe.

We looked at her. She stared boldly back at us with dark, shiny eyes that seemed to say, “Well, what are you waiting for? Paddle.”

So, paddled we did, as smoothly and slowly as possible so as not to dislodge Her Royal Birdship. We glided into a rocky inlet and, as we turned the canoe to position the stern against a large boulder on the shore, our passenger hopped off and toddled to safety. With her back turned to us, she ruffled her feathers before briefly glancing our way. Dismissed, we resumed our expedition.

The bird was one of several living in the Miombo woodland, and ancient fig and baobab trees on Mumbo Island, which is a tiny atoll of about one square kilometre 10 kilometres from Cape Maclear in Lake Malawi. Getting there requires an easy 45-minute boat ride from the reception on the beach at Cape Maclear. As the wooden fishing boat motors past Domwe Island, you’ll see the African fish eagle is widespread around the lake.

Mumbo was unpeopled until Cape Town-based Kayak Africa was awarded a concession to establish a sustainable eco-camp there in 1996. These days, the lodge can accommodate fourteen guests in five separate double tent-chalets and one four-bed family unit on a little peninsula attached to main island – where the kitchen, dining room, games hut and beach are located – by a long wooden bridge. Meals are served buffet-style on the deck/restaurant overlooking the main beach. 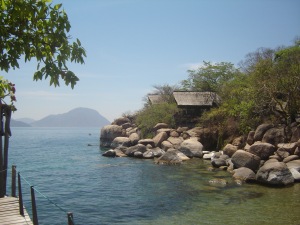 Perched on massive boulders and well secluded from one another, the chalets all overlook the lake. Regardless of whether you lie in bed, hang in the hammock on the deck or sit on the balcony, the views are terrific. During the day you’ll gaze across the water to the blue-grey mountains of the mainland in the distance and, when you look down, you’ll see fish milling about in the clear depths below you. At night, the lights of a hundred of tiny lanterns twinkle across the lake in the distance as fishermen take to the water in their dugout canoes.

That’s not to say my husband, son and I spent much time in our chalets during our four-night stay on Mumbo. With the largest number of fish species in any lake in the world – particularly cichlids, which are tropical freshwater fish well known for their magnificent colours and diversity of species – and remarkably clear water, Lake Malawi is a snorkelling paradise.

Aside from the excellent visibility and opportunity to dive among fish you’ll only otherwise see in books or fish tanks, there’s something particularly luxurious about doing it in fresh, calm and warm water. It’s not just that fresh water is much lighter, more palatable and less sticky to swim in than salt water but given Lake Malawi’s geology, it’s safer and more relaxed too. As you dive through and around the large rounded boulders, there’s little chance of snagging your flesh on jagged edges and, because the fish and aquatic plants are largely harmless, it’s safe to walk and hold on to the rocks as you dive. Moreover, there’s no threat of bilharzia in the water around Mumbo Island.

Above all though, snorkelling in the elongated, submerged crack in the Rift Valley that is Lake Malawi is absolutely fabulous because of its incomparable biological diversity. Cichlids – most of which live within snorkelling distance (that is, no more than 10 metres) from the surface – are famous among evolution researchers because the species – about 1,000 different cichlids live in the lake – was spawned from a common ancestor in a very short time. Living in a largely closed ecosystem, Malawian cichlids have rapidly adapted to survive their ecological niches, which means Lake Malawi is something of a candy shop to scientists and snorkelling enthusiasts. And if, like me, you’re lucky enough to have a budding marine biologist at hand when you’re diving, the lake and its creatures are all the more fascinating.

But, unless you’re the Man from Atlantis, you can’t swim all day, which is just as well because there are other ways to entertain yourself on Mumbo. Following well-marked hiking trails, it takes little over an hour to do the circular route around Mumbo – unless you can’t resist the temptation of stopping off at some of the little beaches for another swim on the way. If you’re lucky, you’ll see a monitor lizard or two on the way. There’s a particularly mammoth male that lives behind the lodge’s kitchen, flicking his tongue as he thinks about dinner. If, you’re even more fortunate, you’ll spot a spotted-necked otter sunning itself on a boulder.

There is, of course, the option of simply sunning yourself on a boulder on Mumbo Island until it’s time for lunch, cocktails or dinner. Or you could take a canoe to circumvent the island in the off chance you’ll have the rare privilege of rescuing an eagle.

(This article was first published on the Life page of Business Day in 2015.)