Posted on February 28, 2013 by Administrator 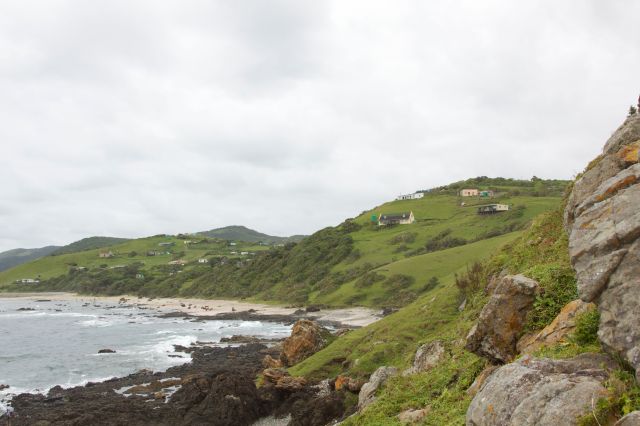 IT pays, while travelling, to sometimes forego luxury in favour of adventure. And, when I travel with my husband and son (Jan-Lucas and Sebastiaan), who are the ultimate adventure seekers, it’s an exchange I’m frequently asked/compelled to make. But, while I may suffer a small flash of regret as luxury is prised from me, the regret is never more than momentary. Ultimately, I’m almost always grateful to them for having nudged me away from predictable plushness towards unexpected adventure.

Take, for example, our recent trip to the Wild Coast. Jan-Lucas and Sebastiaan (particularly the latter) were determined to explore the spearfishing delights of the Indian Ocean in the area. Recent storms however, made the sea churn murkily. So, while in Port St Johns, Sebastiaan called Rob Nettleton – a divemaster and spearfisherman who, together with Debbie Smith, operate a business called Onshore Africa Dive Charters from the village – for some advice.

Rob confirmed that dive conditions were not great but said that if we were to travel about 50 km west of Port St Johns to the other side of the Umgazana River, we’d probably find the water more suitable.

“Call Phineas,” he said. “He’s a local fisherman and entrepreneur who has built a small house near the beach for people who want to fish and dive in the area. It’s a rustic place in a magic spot with excellent diving and spearfishing.”

That’s all Sebastiaan needed to hear.

I, however, wasn’t entirely convinced. Rustic? Exactly how rustic? It was already late afternoon. Did we have time to seek out accommodation in such rural surroundings where distances are often vast and roads poor? What if it wasn’t to our liking?

Given that the deluxe, award-winning Umgazi River Bungalows and Spa lay between where we were in Port St Johns and Phineas’s place, I cajoled (ok, I pleaded) the adventurers to first “check out the resort on the off-chance they had accommodation for us”.

Umgazi is wildly popular for well-heeled holidaymakers. It’s a magnificent development with all the bells, whistles and white-towelled splendour you’d expect of a luxury resort. It’s beautifully located on the river mouth and guests book years in advance to secure their stay there. However, it was early January and schools had just reopened. So, yes, they had accommodation for walk-ins. Lucky us.

But, as we were shown around “our” fragrantly scented cottage on a perfectly manicured lawn by a polite man in a neat waistcoat, I saw Jan-Lucas and Sebastiaan’s crestfallen faces. Five-star hospitality, dressing for dinner and pre-booking fishing expeditions were not what they were after.

About an hour later, Phineas Tatine led us into the two-room cottage he and his sister, Nancy Ginya have built adjacent to Nancy’s home on a hillside at Umgazana, which they rent out to holidaymakers, divers, fishermen and adventurers. It isn’t an Umgazi River Bungalow. It’s a work-in-progress and, when we were there, a trip to the bathroom required a 20-metre walk passed the chickens and across the road. (Nancy and Phineas subsequently completed a bathroom en suite.) The stoep was still under construction and the roof leaked a little in places.

Phineas and Nancy are the most welcoming hosts imaginable. Our comfort and happiness were their prime concerns. The shower was hot. The rooms were spacious. The beds were spotless and comfortable. The locals who stopped by with seafood to sell (and prepare for you, if you choose) were amiable and considerate. The many dogs, goats and chickens, and the pig that made unexpected but regular appearances in the house were curious but most friendly. The view down to the beach and across the ocean was magnificent. The beaches, lagoon, mangrove swamps and walks in the area are pristine. And, if you’re so inclined, you can even walk to Umgazi River Bungalows and Spa for lunch or a manicure.

Phineas is an experienced and knowledgeable fisherman, and an attentive ghillie. Although he doesn’t dive (or even swim), his advice and help was invaluable to the spearfishmen, whose hours beneath the ocean satisfied their yen for adventure.

And me? When I wasn’t walking on the beaches or along the cliffs, or talking to the animals, I sat outside Phineas’s cottage and pondered paradise.

Scroll down for pictures and call Nancy on 073 492 7932 if you’d like to experience Umgazana hospitality – and say “hello” to her, Phineas and their farmyard of creatures for me. 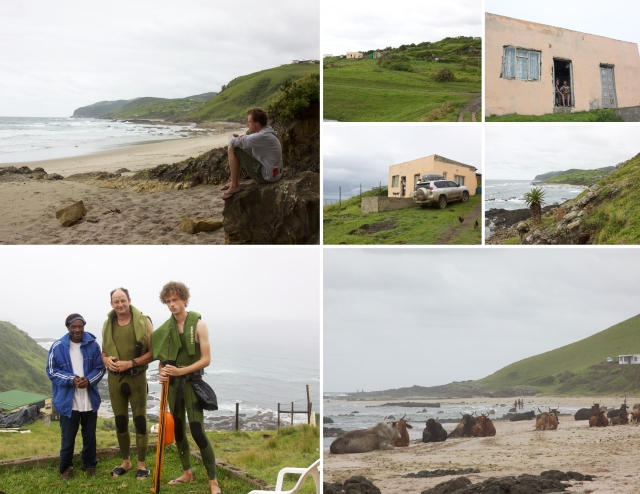 1 Response to When adventure trumps luxury