The quest for noble warming 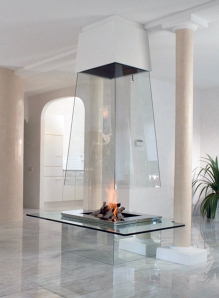 With the nights growing longer and cooler, it’s a “grate” time to update the look of your fireplace and, as I found out while researching this article for the Life section of The Sunday Independent, there are some stunning designs to consider.

FIREPLACES have come a long way since the ancestors of Australopithecus Sediba first scraped shallow little pits into the floors of their caves and frantically affected friction to form fire with tiny bundles of dry twigs and grass.

Gone too, is the era during which warm winter nights were inescapably followed by miserable mornings spent with head and torso deeply buried in the hearth as, grossly grubby from the chore, you laboriously extracted filthy mounds of coal and ash.

These days, if you do it right, you can heat up your home without igniting your own version of volcano Eyjafjallajökull and without inflicting a single scratch to the floor or tiniest fleck of ash on your swish new “dune sunrise” curtains and matching shaggy carpet. Indeed, you can even warm up your world without blowing a fuse at the end of the month when you realise what you have dished out to Eskom for the pleasure. Moreover, nowadays you can create a fireplace that has more panache and pizzazz than Bheki Cele suited up to attend a royal wedding. 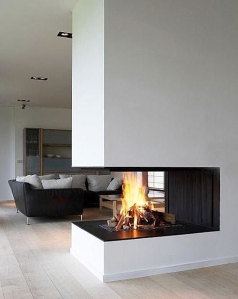 Until recently, architects and interior designers of modern, minimalist homes were inclined to avoid fireplaces, arguing that they were dated and did not suit the sleek, clean and futuristic designs they were after. For a while, under floor heating and ingenious panel heaters incorporated into walls were among the preferred warming methods for modern homes. Now though, a new generation of sensationally creative and highly efficient fireplaces, which meet all the demands of contemporary design, is increasingly making its way into stylish homes the world over.

Originating largely from Scandinavia – where keeping the home fire burning has, for obvious reasons, been a major project since time immemorial – and Europe, new look fireplaces are generally incorporated into the design of rooms in an understated fashion, adding old-fashioned, dancing fire warmth to chic, ultra-modern spaces.

“For a while, architects and interior designers appeared unsure of what to do with fireplaces to make them fit into contemporary homes,” comments Andrea Lindsay-Bowman of Hout Bay-based Bowman Interiors. “Nowadays though, we have once more accepted that they provide a superb central focus for spaces. We realise that, by creating neat and elegant designs around nifty combustion systems that provide excellent heating with minimal fuel, we are able to add to the graceful look of even the most futuristically-designed room, rather than detract from it.” 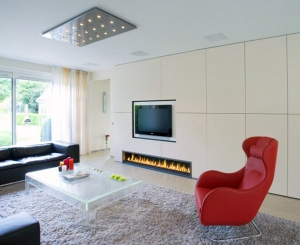 In most instances, 21st century style hearths have been simplified aesthetically to achieve the desired modern look, while the latest technology ensures convenience, effective heating and an environmentally friendly combustion process.

Things like retractable sliding glass-doors have been added, not only to create a clean, frameless effect and to provide a full view of the fire, but also to maximise heating with the minimal consumption of wood. Specially treated, heat resistant glass is used to radiate heat into the room.

Moreover, the use of glass for doors and full framing – in other words, providing the effect of an invisible frame – means that fireplaces can be incorporated into a variety of architectural designs.

Increasingly, architects and interior decorators are locating fireplaces in centre of rooms, on low-slung shelves, halfway up walls, on wall corners, alongside entertainment centres and on specially made parapets. In some homes, fireplaces are positioned in walls between two rooms so that both spaces benefit from the fire and others are built into bookcases. Some designs even incorporate fireplaces into coffee tables. The variety of designs available for metal combustion chambers, which generally form the hidden internal systems of this new generation of fireplaces, mean they can be fitted into almost any space.

What’s more, assuring quick and easy cleaning, nifty grates have been included at the base of the hearth to allow ash to fall into the removable tray below.

In many cases, new fireplace designs can accommodate both wood and gas fires. Where gas is used, various methods are incorporated to achieve an attractive base for the fire. River pebbles, gravel and natural looking ceramic logs are placed over gas vents to create various effects and textures. 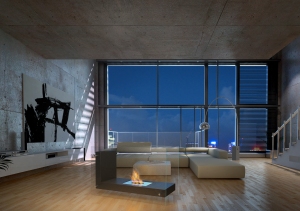 Fire, it's a glassy thing these days. (Photograph: Planika Fires.)

“One of the attractions of the fireplace from a design point of view is that it provides the opportunity to introduce new textures to a space,” adds Lindsay-Bowman. “River pebbles, for example, are increasingly used to break the potential monotony of sleek modern spaces and, where they are used as a base below the flames on a gas fire, they provide an eye-catching contrast between stone and fire. Another technique that is popular in modern homes is the use of a neat stack of firewood somewhere alongside the fireplace. This not only introduces a different texture to the space but also brings about the use of some natural material as décor.”

Fireplaces have come a long way since Australopithecus Sediba’s ancestors first scraped shallow little pits into the floors of their caves. Fire, on the other hand, remains as a hot a feature in our homes as ever.

Author and freelance writer based in Hout Bay near Cape Town in South Africa.
View all posts by Administrator →
This entry was posted in Dilly-dallying in décor. Bookmark the permalink.

2 Responses to The quest for noble warming