Posted on February 13, 2011 by Administrator 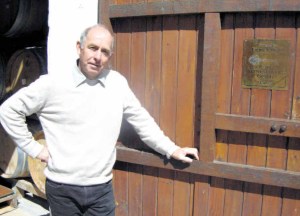 ETIENNE le Riche is my dream man. And that is not just because he lives and works in the most beautiful oak-and-vine adorned spot beneath the splendidly craggy cliffs of Stellenbosch’s Jonkershoek Mountains on a farm with the romantic name of Leef op Hoop (Live on Hope). Or because the neat-as-a-pin house in which he and his wife, ballet teacher Marcelle live in is a national monument. Or that the dwelling is just 12 paces from the large double door of the natty little cellar in which he crafts wines that have buckled the knees of the world’s hardest-nosed wine buffs.

And no, he is not my ideal man because he is known as SA’s ‘King of Cabernet’ – though the notion of a locally crowned vinified royal is rather intoxicating, don’t you think? Neither is the winemaker ‘it’ for me because he was named the John Platter Wineman of the Year in 1990. Indeed, I am not even swayed by the fact that he was hailed the “most admired winemaker” by a prominent wine columnist recently. And neither do his brilliant blue eyes nor his easy smile tip my scales…that far.

Etienne le Riche is my dream man because I am in awe of people like him who, early enough in their lives to make it count, acknowledge their passion, knack, forte – call it what you will – and are focused, brave and confident enough to give themselves over to making the most of their aptitude and passion, regardless of what is happening around them.

For sure, Le Riche – whose ancestors arrived in the Cape from Thimarais in Normandy with the French Huguenots in 1698 – is not your average, run-of-the-press kind of winemaker. He has done what many South African viniculturists fantasise about, but which few have the guts to actually do.

“Everyone has talent,” wrote novelist Erica Jong. “What is rare is the courage to follow the talent to the dark place where it leads.” And, while there is no evidence (beyond the dark berry colour of a glass of his wine) of a “dark place” in Le Riche’s single-handed voyage – in the good ship, Cabernet Sauvignon – it is fair to assume it took an extraordinarily brave heart to cast off solo from a well-feathered nest on a secure shore.

After two successful decades at the revered and amply resourced Rustenberg Wine Estate, Le Riche decided to go it alone in 1996. He did so believing that the only way to do anything really well is to specialise, and that the best thing to specialise in is that thing that inspires you most. For Le Riche, the muse was Cabernet Sauvignon and he found the place from which to practise his craft in the form of Leef op Hoop, which is ideally located near some of the area’s finest Cabernet Sauvignon vineyards.

“The idea was that if you focus on one thing and do it to the best of your ability, you’ll build a following,” says the winemaker, who studied originally studied oenology/viticulture and economy at the University of Stellenbosch and later added a MSc in viticulture to his credentials.

Build a following Le Riche certainly did, very quickly too. But not until he had remodelled the old Leef op Hoop cellar, which had, for some time, been used as a tractor shed before he epoxy-coated the old kuipe (wine vats), installed good second hand equipment and fitted a small bottling line. And not until he had established where to get the best grapes from, and how to best work with the viticulturists and farmers involved to ensure that those grapes were delivered in the exact shape he required.

“It’s the advantage of not having my own vineyards,” he explains. “I am not limited to one region or vineyard and can truly be selective about the grapes I use.”

The first wine produced by Le Riche on Leef op Hope was the Le Riche Cabernet Reserve 1997. It was an immediate success, earning five stars in the annual John Platter guide and numerous other accolades. It was the beginning of a trend and, since then, the Le Riche Cabernet Reserve, standard Cabernet Sauvignon and Le Riche Cabernet/Merlot have flown out of cellar, pausing only to take regular bows on competition rostrums along the way. The reserve was judged the best Cabernet by the Wine of the Month Club, won Veritas Double Gold in 1998 and was selected for South African Airways first class wine list in 2004.

Each year, Le Riche processes approximately 60 tons of grapes, 90% of which is Cabernet Sauvignon, 5% Merlot and 5% Chardonnay. (He recently began making a lightly wooded Chardonnay because he wanted “a fresh white wine to drink occasionally”.)

Le Riche is unabashedly traditional and – aided by long-time winemaking assistant, Mark Daniels and more recently by daughter, Yvonne in a marketing role – has a hand in every stage of the winemaking process, from working with the viticulturists in the vineyards to hand-labelling each bottle and packaging it for despatch. (Son Christo, also a winemaker, is currently working at Stag’s Leap in the Napa Valley.)

The cellar is low-tech and traditional methods – grapes are hand sorted, open tank fermented, punched down and so forth – are used. But, as Le Riche points out, just because he uses time-honoured methods and specialises in one varietal, does not limit the options and decisions that need to be made during the process: “Quite the contrary,” he says, “the more you specialise, the more you learn and the more creative you are motivated to become. One of the reasons it is possible to specialise is because of all the options that are available, even in specialisation. My grapes come from four different sites and I make four different wines that involve many different options and techniques. Specialisation needs time and experimentation. I might be scientific and methodical but there is something experimental about every vintage, and I am always wondering how I can do it differently and better.”

And as if it is not enough to do that in Stellenbosch once a year, Le Riche – who is a founding member of the Cape Winemakers Guild and on the technical committee of the Wine And Spirit Board – helps a friend make wine in Bergerac in France. For services rendered, the Cab King makes his own Le Riche Grand Vin de Terroir there, which he imports back to SA after ageing, bottling and labelling. So, a dream man with a French twist. Could it get any better?

First published in The Weekender in 2009.

Author and freelance writer based in Hout Bay near Cape Town in South Africa.
View all posts by Administrator →
This entry was posted in As I know vino. Bookmark the permalink.