Cruising in a big way

Posted on January 8, 2011 by Administrator 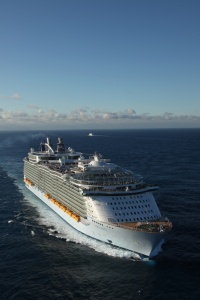 A mother of cruise liner, the Oasis of the Seas. (Photograph: Royal Caribbean.)

ASIDE from a brief phase of folly in my unfettered youth, I am not a cruising kind of woman. That is not only due to my predisposition to claustrophobia and seasickness. It is also because the thought of being closeted in a mammoth, mobile hotel with hundreds of other jolly holidaymakers, where it is impossible for me to head for the hills on a whim, is as unappealing to me as the notion of sharing a home with my husband’s other four wives.

There ain’t no kraal big enough.

But when, late last year, I was invited to spend four days in the Caribbean on the inaugural media cruise of the world’s largest, brand spanking new cruise liner, temptation prevailed. I turned the other cheek and whipped out the useful old adage, “I’ll try anything once”.

Not that it is anywhere near adequate to describe the Oasis of the Seas as “anything”. Rising 16-storeys out of the water, it is earth’s largest passenger ship with a capacity for 6 296 guests and 2 165 crew. That is a substantial body count for one boat. The Freedom of the Seas, which was the largest ship in Royal Caribbean International’s fleet of 20 until the advent of the Oasis, carries 3 634 guests.

In fact, the Oasis is – based on its gross registered tons and guest count – almost 50% larger than any other cruise liner ever built to date. To put it in some perspective, if it were possible to stand the ship upright on its bow, it would be taller (at 360 metres) than the Eiffel Tower. And, at 65 metres, it is wider than the Suez Canal.

As is the case with other things in life though, said president and CEO of Royal Caribbean, Adam Goldstein at a press conference during the cruise, it is not so much size as what you do with it that matters. The primary objective of the gobsmackingly huge proportions of the new Oasis is only partly to accommodate more guests than ever in more sumptuous surroundings than ever. It also aims to accommodate as many (what Goldstein calls) “wow experiences” for guests as possible.

You can eat at 24 different restaurants, submerge yourself in 21 different pools, ride round and round on a handcrafted carousel, boogie the night away at three different nightclubs, and climb a variety of routes up two 13-metre high rock walls.

You can ice skate, surf on two Flowrider wave machines on the sports deck, play basketball, soar nine decks high on a 25 metre zip line across the ship, despatch your kids to the teenage zone and not see them again for days, sink a putt on the nine-hole golf course, lose the shirt off your back in the casino, laugh yourself silly at the Comedy Club and have a drink at one of more than 20 – I stopped counting at that point – bars throughout the vessel.

The Oasis’s AquaTheatre features the highest diving boards and deepest pools ever incorporated into a cruise liner to facilitate jaw-dropping aquatic acrobatic and synchronized swimming performances whose entertainment value was, for me, rivalled only by the Frozen In Time ice-skating show in Studio B and a Broadway performance of Hairspray at the Opal Theatre.

The Oasis is brazenly and unashamedly an ocean-going theme park with more hoopla than Disneyland, and more than bells and whistles than China’s new US$300-billion high-speed train system.

The passenger ramps that take you onto the Oasis at Cruise Terminal 18 at Port Everglades near Fort Lauderdale in Florida – the port was specially expanded and upgraded at an estimated cost of US$75-million to facilitate the ship – lead into the Royal Promenade, which is one of seven “neighbourhoods” on the Oasis. (The other areas include Central Park, Boardwalk, Pool and Sports Zone, Vitality at Sea Spa and Fitness Centre, Entertainment Place and Youth Zone.)

As I stepped on board and paused for a minute to establish whether I could feel the ocean move beneath me (should I take a motion sick tablet, just in case?), my first impression of the Royal Promenade was that it is a combination of an über swish shopping mall and an enormous hotel reception. Assured of the fact that the ship was as steady as a rock (it was still moored at that point), I undertook to explore further.

Indeed, the Royal Promenade on deck five features a number of boutique-style clothing, jewellery, gift, cosmetic, camera and wine stores, and the fabulously quaint “world’s first gourmet cupcake store at sea”, the Cupcake Cupboard. But when – guided by the gentle popping sound of corks, I strolled into the luxuriously appointed Champagne Bar, took my first onboard sip of delicious, cold bubbly and looked more closely around me – I accepted that neither mall nor hotel lobby could compare to the Oasis.

Above me, two giant skylights arched upwards into the open air on deck six, allowing the natural light to flood inwards to create a impression of spaciousness and aeration. Accepting a second glass of champagne – nowhere to drive and no one to impress with ingenious conversation – I promenaded forth until I encountered the Rising Tide Bar.

Another first in cruising, this spherical, flying saucer-like mechanism is a fully equipped saloon that, with its 32 guests happily ensconced around the bar, travels slowly up and down between decks five and eight.

It’s novel, I concede, but I soon had enough of getting high on the Rising Tide and decided it was time to check out my cabin, or stateroom, as it is called.

There are a total of 2 706 staterooms on the Oasis. Of these, 1 956 have balconies. There are also 28 multi-level urban-style lofts with floor to ceiling windows and spectacular views across the sea.

“Claustrophobia?” I thought, rolling my eyes heavenward, as I took another bite. “How could I ever have imagined that possible?”

But the next morning, to maintain my non-claustrophobic state of mind and prepare for another day of over-indulgence, I headed out through the largest, most extensively equipped gym and onto longest (800 metres) jogging track ever to incite exercise among the guests of a passenger ship.

As I trotted around above the blue water of the Caribbean, enjoying the al fresco sight and smell of the sea, and occasionally stepping aside to allow a couple of Caster Semenyes to again lap me, I realised I had still not felt the motion of the ocean beneath me. Perhaps then, I am, after all, a cruising kind of woman.

(This article was first published in FM Life in FM in February 2010. The picture is courtesy of Royal Caribbean International.)