Posted on January 6, 2011 by Administrator 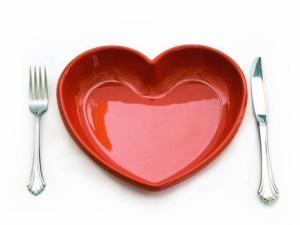 SO, Valentine’s Day is upon us once more, which – if the Hallmark hypothesis is to be believed – means candlelit dinners, boxes of chocolates, bottles of bubbly and mounting pressure to be loving, romantic and starry-eyed. But perhaps, as my restlessly single friend, Catherine asserted recently, Valentine’s Day simply boils down (or up) to mounting pressure to mount or be mounted.

“And let’s face it,” she said, absent-mindedly fumbling a large cucumber with one hand and caressing a carrot with the other as we prepared the salad for a Sunday braai, “the only real aphrodisiac in the world is a large, glistening slab of meat.”

But then I handed her an avocado and her eyes lit up: “Exactly,” she responded passionately, gently cupping its smooth roundness in one hand. “It is all about genitalia.”

According to Catherine, the name “avocado” comes from the ancient Aztec word “ahuacatl”, which means “testicle tree”. It was considered so madly potent by the Spanish priesthood that, at some point, they banned its consumption for fear of uninhibited humping happening in the hacienda.

But, claimed my feverish friend (by then, shiny red in the face and breathing rather heavily), the fruit’s alleged ability to intensify sexual desire has nothing to do with the fact that it contains loads of vitamins and a good cop kind of oil. Instead, avocadoes are apparently sexy because, as you gaze upwards from beneath the tree and see them hanging happily in pairs up there, they resemble male testicles.

“Sad though,” she mused, shoulders slumping now at the thought, “that the ballsy notion is not upheld by present day displays of avos packed – tighter than a cyclist’s pair – in polystyrene and plastic in Woolies or, worse still, piled high pyramid-style in Fruit and Veg City.”

For sure, Catherine is a diamond in the rough with, sneers her stepmother on a regular basis, little chance of ever being picked up and even halfway polished. She has a point though: most so-called aphrodisiacs are these days believed to be upstanding sexual powerhouses, not so much because they contain liberal lashings of zinc, iron, calcium, phosphorous, folic acid, vitamins and the like, but rather because of their suggestive shapes and/or textures.

Indeed, many aphrodisiacal claims – some so old that they were already lifting togas in ancient Rome – have, in recent years, been exposed in scientific circles as fallacy – or perhaps that should be “phallicy”. Most alleged arousers of sexual desire, say scientists, rose to this status because their form and/or texture triggered raunchy imaginings at some point in time.

Have you, for instance, ever seen a woman reach out and intentionally touch and select the smallest carrots, turnips, cucumbers or bananas in a supermarket? Have you noticed how careful others are as they tenderly slide the cellophane wrapping from said big, hard cucumber before smoothly slipping a shiny knife into its cool, moist flesh? Why do you think that many of the world’s top chefs endorse quick-steaming methods, which retain the crunchy rigidity of asparagus and inhibit limpness at all costs? And what is the story about the rounded tip of that vegetable being the best part, particularly when it is dripping juicily with butter?

Of course, the form and feel theory does not end with phallicism. Surely you do not believe, for example, that oysters are treasured as the world’s archetypal aphrodisiac because they taste like the ocean, and are sometimes chewier than a four-year-old tube of superglue and slimier than swarm of slugs in a tub of KY-jelly? Take a closer look at one before you next squeeze a reflexive drop of lemon juice onto it or add to its glossy moistness by adding a touch of tingly Tabasco, and you will appreciate my point. Scrutinise a mussel in a half shell, and a half sliced fig, artichoke and pomegranate to further validate the vaginal theory.

Then there are raspberries and strawberries, which, when combined with bubbly, are said to be vigorous aids for seduction: “I have seen them described in some erotica as fruit nipples,” sighed Catherine doubtfully.

Of course, there are many other alleged lust inspiring ingredients – like anchovies, garlic, almonds, wheat germ, basil, ginger, coriander, pine nuts, caviar, truffles and chocolate – whose form does not necessarily bring to mind sexy body parts, but which have been widely believed to contain chemicals that engender feelings of well-being and euphoria that could lead to getting some action.

“And I have tried the chilli,” mumbled my increasingly despondent friend, ravaging a lettuce into small bits. “It worked at some level, I guess. My date took my panting and the bead of sweat that appeared upon my top lip as signs of arousal. Unfortunately he could not keep up as I sprinted to the fridge and doused myself with milk.”

Notwithstanding mounting evidence that evermore exposes the mythical nature of the aphrodisiac, countless hopeful souls continue to be titillated by the notion of foods that stimulate physical desire. These include leading chefs, many of whom are aroused enough by the concept of sexy food to create special Valentine’s Day menus each year.

“Absolutely,” effuses Jackie Cameron, who is the executive chef at Mooi River-based Hartford House, which was recently listed as one of South Africa’s top ten eateries at the Prudential Eat Out Restaurant Awards. “Hartford is such a romantic destination that it would be a travesty not to celebrate Valentine’s Day here. We certainly include some of the ingredients that are considered classic aphrodisiacs in our special really romantic menu but I try to present them as creatively as possible.”

Jackie’s lavender infused hot chocolate palette cleanser and her delicious, rich rosy-coloured Norwegian salmon dishes most certainly “find the spot”, confirm those who have revelled in them in the rolling hills of the KwaZulu-Natal Midlands.

In Johannesburg, the aptly named Aphrodisiac restaurant offers a menu for wannabe lovers that includes things like Bloody Mary oyster shots, mussels, fillet stuffed with figs and Kir Royale mousse. Owner Amanda Wickstrom however, is cautious about coming on too strong.

“While it is tempting to get really creative with so-called aphrodisiacs, we find that our clientele enjoys the classic approach to Valentine’s Day,” she says. “And since ours is a set menu, we avoid ingredients that people are not familiar with.”

Simoné Rossouw, chef at Cape Town’s recently opened The Showroom Café concurs that it can be dangerous to get “too carried away” when preparing aphrodisiac type dishes: “There is no doubt that love is in the air on Valentine’s Day, and we spoil our diners with bubbly and chocolates. I don’t believe however, that people necessarily want to eat love stimulants on that day. They simply want to go out and have a wonderful romantic dinner with someone special. That is what we aim to provide.”

So, Valentine’s Day is upon us once more and, if you are planning to stoke the flames of passion with your darling by indulging some food of love, spare a thought for my friend Catherine, whose final experiment involves honey.

During Medieval years, she tells me, it was common to seduce partners with mead, which is made from fermented honey. In fact, Persian bridal couples sipped mead at their weddings to sweeten their marriage. That is where the word “honeymoon” comes from. Catherine assures me though, that she is not after the nuptials: she just wants to get sticky.

(This article, first published in The Weekender in February 2009, was written to coincide with Valentine’s Day. Image from Kaboose.com)