When the GPS drives you up the wall

Posted on January 5, 2011 by Administrator 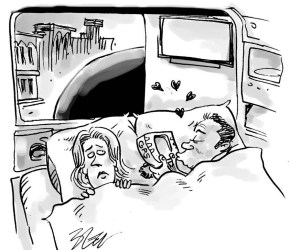 APPARENTLY I cannot read a map, which is why it was decided on a recent family holiday to Italy that we would hire, along with a galumphingly great campervan, a portable global positioning system (GPS) to help us navigate the country.

The little black device looked innocuous enough as my husband positioned it to the right of the steering wheel shortly after we had driven from the grounds of Avis Camper Hire in Venice.

It took him some time to click through the menu to change its settings from Italian to English. But, from the moment the system uttered its first authoritative “please take the second exit from the roundabout in 200 metres” in its posh, poised and oh-so-reassuring feminine voice, my husband was love-struck.

With umpteen know-it-all commands – each of which was acknowledged by Smitten Spouse with an embarrassingly grovelling, “certainly, mam”, “whatever you say”, “with pleasure” or “you know best, madam” – the appliance successfully lead us out of Venice and, at last, fell silent as we headed northwest towards Cittadella.

“Well, that was easy,” I conceded as graciously as possible from the passenger seat, pleased with the opportunity to finally be able to participate in the conversation. “It’s going to be a useful gadget.”

I glanced at my husband. He lifted a hand and gently adjusted (caressed?) the little monitor in front of him: “Her name is Lily,” he murmured protectively.

“Lily?” chorused my bemused son and I. “Why Lily?”

“It’s obvious,” responded our driver with a little sigh. “She is a Tom Tom GPS and she reminds me of that beautiful and famous English actress, Lily Thompson. Can’t you understand then…Lily Tom Tom?”

He meant Emma Thompson. But, in fact, that was neither here nor there. Lily had a life of her own and, most disturbingly, it emerged, an irksome place in mine as ‘the other woman’ on our Italian holiday.

As if his sycophantic coo-ing, ooh-ing and aah-ing at her stupendous navigation skills were not enough to endure while we were driving, the besotted sop could not keep his hands off her even when the vehicle was still.

Inevitably, having switched off the engine, he lovingly took the damn thing from the cab, messed about with it and gently pushed it into his pocket so that it would “help guide us” even during our walking tours. My son was mortified when, as we strolled down the aisle of a large and busy supermarket one day, Lily’s voice rang loud and clear for all to hear from his father’s pocket, “please make a u-turn immediately, please make a u-turn immediately”.

Indeed, the little thingamajig and my husband were inseparable.

One dark and still night, as I walked along the water towards to our campsite beside Lago di Garda in Northern Italy, I heard whispering as I neared the camper. Staying in the shadows, I tiptoed closer.

“She doesn’t need to know, Lily,” he murmured breathlessly in the dark, clicking away at the black buttons at the same time. “The thing is, if we avoid the freeway, we can get there without her realising where we’re going. You can take us in the back way, through the countryside. Let’s take the pretty, quiet route, avoid the big road signs and we’ll be home free. I know you can do it, Lily. You are such a clever woman.”

Besieged by feelings of jealousy and betrayal, I took a deep breath to calm myself. I would, I decided, twisting the broken toothbrush in my hands as if I were wringing a neck, bide my time. My revenge should be as delicious as it was deadly and that required painstaking calculation.

So it was, the next morning, we left Lago di Garda in a westerly direction to “explore the countryside of Lombardy”. True to their dastardly scheme, driver and Lily took us along a very scenic but extremely steep and narrow, one-lane road that twists and snakes through the countryside, and in and out of many little villages along the way.

The big van was slow and ungainly, which elicited no sympathy from the impatient locals who rushed up behind and towards us. Time and again I noticed, with pleasure, the flicker of irritation in my husband’s eyes as he was forced to manoeuvre the lumbering vehicle out of the path of irritated Italian motorists, who flung their arms about in rage and spat abuse at us as they drove past.

“I would offer to take a look at the map and see if there isn’t an easier route,” I proposed sweetly. “But I don’t know where we are headed and I am sure Lily knows best.”

Then, in her ever-pompous “please bear left in 70 metres” voice, mistress Lily directed her unflagging devotee into a tapering one-way street that runs down the centre of what is arguably Lombardy’s most compact medieval hamlets.

“Really, Lily?” he dared to ask, albeit apologetically, as the left mirror scraped against an ancient wall. But it was too late. The cumbersome six-sleeper was already wedged between the antiquated red brick walls of la panetteria on the left and the balcony on the second floor of il restorante on the right like a big, white salumi jammed into an over-full picnic basket.

“L’idiota turista!” yelled the baker from the doorway of his shop, in which he was now imprisoned by the door on the driver’s side. “Go back to America!” (Europeans, it seems, assume that everyone in a campervan is American.)

“You can’t park it ‘ere!” shouted a waiter from the balcony above.

“Il marciapiede! (The pavement!) Il marciapiede!” bellowed an elderly pedestrian, who was now barred from continuing his stroll down the street.

“Please turn left at the T-junction in 200 metres,” said Lily.

(This article was first published in The Weekender in September 2009. The cartoon is the work of Brandon Reynolds.)

Author and freelance writer based in Hout Bay near Cape Town in South Africa.
View all posts by Administrator →
This entry was posted in Wishing I wasn't here.... Bookmark the permalink.