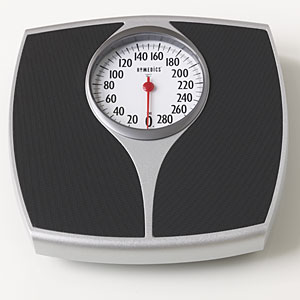 IN the old days, slimming clubs meant going to weekly meetings and facing the ordeal of climbing on a scale in front of other wannabe-skinnies. A group leader – usually a smug ex-fatty – would be on hand to record your weight. If you’d shed grams, she’d nod, smile and quietly write the number down. Gain a gram or two however, and you relinquished all rights to confidentiality.

“Penny,” smug ex-fatty would boom across the room, “plus two. Yes. Penny. PLUS two.”

A public flogging had nothing on the humiliation of having your weight-gain broadcast to the broader community. Forget diet plans, calorie counting and weekly pep talks; the real success of slimming clubs is the fear of failure in a public place. And yes, that’s why I let my Weighless membership lapse; if the numbers are going up (and they are), there’ll be no advertising my spreadsheets.

But technology is changing the face of dieting – no more smug ex-fatties necessary. The principle however, remains the same; shame works.

Brazilian weight-loss company Meta Real, for example, is using social-media to scare its members into shape. Its new Virtual Fridge Lock smartphone app, available to people who sign up for the company’s diet program, posts reports of refrigerator raids on Twitter and Facebook.

The app is linked to a magnetic device that is fastened to the side of participants’ fridges. If the fridge door is opened late at night – which, says Meta Real, is when most dieters give in and overeat – a device in the magnet notifies the app. The app immediately updates the culprit’s FaceBook and/or Twitter status with the words, “This person just raided the fridge”. Friends and followers are encouraged to respond with tweets and posts condemning the transgression.

There are other weight-loss apps designed to help you shed kilograms. One of the most popular is DailyBurn, which tracks your diet and fitness, and tells you how many calories you can eat each day, while Meal Snap analyses photographs of your food and provides you with calorie content.

If however, you like the “name and shame in social media” approach but need something even more ruthless than the Virtual Fridge Lock, you could sign up for the Facebook-operated app called Aherk! to achieve your goals.

Aherk! is described as “a goal-oriented self-blackmailing service”. It works as follows: You log into the Aherk! site, type in your weight-loss goal and set a deadline to achieve it. You then “put your ass on the line” (these are the words used on the site) by uploading a “compromising picture of yourself”, which will be posted to FaceBook if you don’t achieve your goal.

When the deadline arrives, the app automatically asks your Facebook friends to vote to indicate whether or not you’ve achieved your goal. If the answer is no – ta dah! – said compromising photograph appears on your Facebook page.

The developers of the Virtual Fridge Lock and Aherk! argue there’s a growing body of evidence that humiliation via social media is an effective way of losing weight. Am I likely to sign up? Fat chance.

(This article was first published in Business Day in 2012.)

Author and freelance writer based in Hout Bay near Cape Town in South Africa.
View all posts by Administrator →
This entry was posted in Technology touch. Bookmark the permalink.