Smart food – because smart phones are so last Tuesday 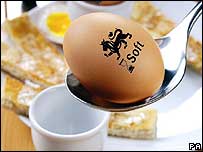 An egg that tells you when it's boiled to perfection. (Photograph: Lion Quality Eggs.)

WHO gives a noggin whether the chicken came before the egg, or visa versa? What is clear now is that the egg is the more intelligent of the two. That’s since a British company introduced self-timing eggs whose shells are treated with heat-sensitive invisible ink that turns black the moment the egg is ready. All you have to do is make your choice from soft, medium or hard-boiled, buy accordingly and keep an eye on the egg as it boils.

While the process of boiling an egg is easy enough, it’s generally accepted that getting it just right is not. If Jeremy Paxman’s book, On Royalty is to be believed, not even the Prince of Wales’s chef makes the grade in this regard. (The book alleges that as many as seven eggs are boiled for Prince Charles per meal in the hope that at least one will meet his approval.)

In the absence of the self-timing variety, the resident culinary whiz in my home uses a specially imported Egg-Perfect egg timer in his quest for excellence in eggs. The device is dropped into the water with the egg and changes colour to indicate when the egg is soft, medium or hard. It’s mostly almost accurate.

“Self-timing eggs? What a brilliant idea. If they work, they’ll make thousands of people happy. That’s real convenience,’ she says.

Convenience, it seems, is what inspires most developments in food and drink. And, if you think that being able to boil your breakfast to perfection is handy, imagine being able season your egg with eternally free-flowing salt?

In Bhavnagar in India scientists, Parthasarathi Dastidar and Pushpito Ghosh have succeeded in smoothing salt into circular shapes to produce a product that doesn’t cake in humid weather. This new free-flowing table salt, they say, will offer the food industry “a more convenient and aesthetically appealing product, and reduce the amount of frustration caused when salt clumps”.

Then, as if free-flowing salt is not exciting enough, consider the ‘world’s first self-refrigerating can’ that – once activated by twisting the base – uses thermal, insulating and vacuum heat pump technology to reduce its contents to 16,7° C in three minutes.

To the delight of beer drinkers the world over, unconfirmed reports say that the IC Can will soon be used by North American brewer Miller. It was developed by Florida-based “thermal solutions company”, Tempra Technology, which is also behind non-chemical, hand-held, self-heating packaging for products like soup, coffee, tea, hot chocolate and even camping meals.

Tempra’s “safe and environmentally-friendly” technology is different from that used for self-heating caffeine drinks by Italian invention, Caldo Caldo, which are available locally. This device uses the ‘exothermic reaction between anhydrous calcium chloride and water’ to heat up its contents. If that doesn’t scare you away, all you need to do is break a seal at the bottom of the container and shake it for about 40 seconds. Easy enough to prepare but, tasted it, and in my opinion Caldo Caldo is more like ‘oldo oldo’ coffee that could have been brewed by Brutus for Caesar, albeit hot.

Other more practical packaging developments for food include labels that sense spoilage in meat products by detecting food-borne bacteriological levels through the wrap and change colour to indicate spoilage.

My favourite recent culinary invention however, is the cooking robot that was launched recently after years of development by Chinese engineers in Shenzhen. AICookingrobot (also known as Robo-Cook), say his inventors, can fry, bake, boil and steam and is capable of cooking thousands of Chinese dishes. The robot, which at a recent exhibition cooked a dish of “beautifully-flavoured, attractive-looking” shrimp in five minutes, is now on sale.

The question is, can he boil an egg?