Presentation? Count me in, but don’t make me sing along 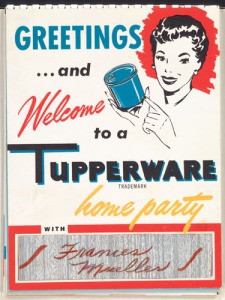 Tupperware salespeople use a variety of presentation techniques. These are not alway successful in other environments. (Picture: Tupperware Diva.)

ABSOLUTELY the most memorable presentation of my life took place at the first and last Tupperware party I ever attended many years ago. The hostess, a petite and eager woman in a neatly blossoming Biggie Best apron, stood in the centre of the room, ready to begin her pitch. She placed her hands together in a soft, prayer-like pose, cleared her throat graciously several times and, after considerable smiling and nodding, finally had the attention of the group of chiefly reluctantees assembled around the room.

“Good evening,” she beamed, as we all looked at her, not without misgiving. “Welcome. Let’s warm up with a song and some clapping. It’s called the Tupperware song and, don’t worry, you’ll catch on quickly. It goes like this…”

Her bubbly request was met by disbelieving stares. I may even have gasped. There was a moment of terrible, unyielding silence. Her hands froze mid-clap. But was too late. She was in too far to put a lid on it – Tupperware or not.

Her voice trembled as, eyes rolled heavenward and hands tapping unconvincingly, she began the ditty – solo. The rest of us shuffled, looked at our feet and into our wine glasses. The embarrassment was deep and awful. I don’t remember the exact words of the song but I recall that the chorus included a couple of “yup, yups and yay, yays”.

After what seemed an eternity, her voice petered out and, hands now lifeless at her sides, she turned to the table of plastic ware behind her, lifted a large transparent bowl and held it out to us, as if in appeal.

It was a short evening and we left, ashamed and Tupperwareless.

Unsurprisingly, take-up was nil. Almost as one, victims slid lower in their chairs, assuming positions below the radar. Our tormentor was unaware and untroubled. He broke into a Zuma-like rocking motion and upped the volume. Now people began to twitch and squirm with embarrassment and increasingly, irritation.

Then there are those presenters who begin their sessions by bombarding the audience with questions that they actually expect to be answered, either by individuals or by loud chorus.

A survey conducted in the US earlier this year disclosed that as many as 80% of business presentations fail. Is anyone surprised? On the long list of Terminal Diseases in Presentations, Death by Embarrassment is surely second only to the well-documented virus, Death by PowerPoint.

And, worryingly, the embarrassment syndrome is upheld by rule number one in Successful Presentations 101, which insists that presenters “get their audience involved and moving”.

Nine times out of ten, say presentation gurus, audiences remember a session in which they participate.

Indeed, that lesson sticks but what too many presenters seem to ignore is the qualifier that follows: Make the participation voluntary and easy. Do not expect your audience to contribute before you have done some serious groundwork, won their attention and earned their desire to participate.

Involuntary participation – particularly when it involves potentially awkward activities like singing, clapping, chanting and dancing – can be disastrous. Neither is the early stage of a presentation a good time to fire questions at an unfamiliar audience if you are hoping for an enthusiastic response. People do not want to feel threatened. Most – even those who are well known for dancing on tables at parties – do not want to attract attention to themselves in new business environment among strangers. Above all, if you are the presenter, you do not want to be viewed as a tyrant – or even worse perhaps, pitiful.

The key to a successful presentation, says presentation skills trainer, Paul du Toit of Congruence Consulting, is to “understand who your audience is and what their needs and/or problems are, particularly the ones you are in a position to fulfill or solve”. He might add that it is just as important to read their mood in the moment. Are they likely to break into song? Do they look as if they want to clap or chant – now… ever?

It doesn’t take a psychology degree to know that the delegates of a leadership conference are unlikely to relish the invitation to clap, sing or chant on demand, particularly at 08h00 on Monday. And the Tupperware song? Perhaps it worked in some circles, especially where the wine was served earlier and consumed quicker.

The encouraging thing is that most people want others to succeed. We want presenters to do well. If we make the time to attend a presentation, we want it to be worthwhile. We want to be informed and indeed, entertained. On the other hand, I don’t know about you, but I don’t want to be the entertainment.

(This was first published in Real Business.)

Author and freelance writer based in Hout Bay near Cape Town in South Africa.
View all posts by Administrator →
This entry was posted in Workplace space. Bookmark the permalink.